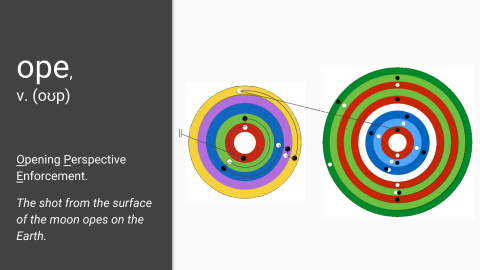 Editing between shots in VR is challenging. Mostly this is because you can’t be sure where the viewer will be facing when it’s time to cut. It’s dangerous to put important events at the beginning of a shot because a viewer might miss them before she has time to decide where to look.

There are ways to shoot and edit VR films that minimize this problem, however. I stole the diagrams here from Jessica Brillhart, though set two of them together and added the arrows to illustrate my concept. In Jessica’s originals:

So when editing, you just rotate the rings to line up the dots.

Now of course it’s not that simple:

These are all noble artistic challenges to pursue, and these constraints breed marvelous creative results. However, they are stories for another time. My area of interest here is what to call it when you skirt this issue. Sometimes you don’t want orientation to be continuous, relative to the previous shot. You just want to say, “No matter what, I want the viewer to start this shot facing this way.”

In terms of Jessica’s diagrams, you’d end your current circle, jumping off its final outermost ring, and move over to start growing a new circle of rings.

I’d call a move like this an “ope”, standing for Opening Perspective Enforcement. As a verb, too, one could say, “The shot from the surface of the moon opes on the Earth.” It sounds a big like “the shot opens on,” which I consider a feature of the word, and I was pleasantly surprised to discover that “to ope” is in fact an archaic form of the verb “to open”.

You can force any combination of the three degrees of rotation, and preserving what the viewer is doing is in any of the others. For example, you could “ope the tilt” onto a plane in the sky (as long as you oped the tilt back to normal for the rest of the sequence, most likely).

Another subtlety: if it is the case that humans keep track of their real world orientation, you would be accepting by oping that viewers would experience different differentials between that and their orientation in your VR experience.

For more VR Vocab, check out this video:

You are currently reading ope at cmloegcmluin.